Tomoko Iwamoto is kept a virtual prisoner in Malaysia by crime boss Peter Yang, using her as a killer for hire, a highly-trained trophy he thinks he can control. Until Peter pushes Tomoko too far, ordering her to kill his own wife.

With her repaired android lover, who could prove to be even more dangerous than Tomoko herself, Tomoko sets in motion a plan of escape that will threaten Peter’s criminal empire and force him to a final confrontation in Japan.

Pornopsychedelica is a heady mix of sci-fi thriller, erotica and violence, where ruthless gangs own the streets, and murder and sex are turned into sadistic performance art.

Fans of Anime and Kill Bill will devour this novel. 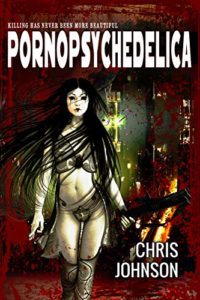